Moline has always thrived and continues to thrive as a manufacturing base. However, the modern Moline has also become a regional and national destination for tourists, new businesses and is a model for progressive urban planning. 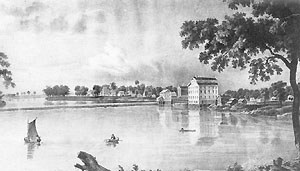 This city of 43,000 people, bounded on the north and south by the Mississippi and Rock River respectively, and located between the cities of Rock Island and East Moline, is a central and thriving part of the Quad City metropolitan area.

While we honor our past in Moline, we also look to the future. This is evident in the new and rehabilitated buildings now rising from the once industrial riverfront area, in the flourishing ethnic neighborhoods, in the regional center for sports and entertainment at the state-of-the-art civic center, and in the outdoor activities, festivals, and year-round entertainment.

In 1836, when David Jr. Sears arrived, the spot that was to become Moline had only three permanent buildings. With his pioneer spirit and eye to the future, Sears built a dam and several mills, driven by the power of the rolling rapids that was the Mississippi River at the time. As the mills prospered, more settlers arrived and in 1843 a town was platted by Sears and six other men. The men decided to name the town Moline, an adaptation of French meaning 'Mill Town' or 'City of Mills'. In 1848, Moline was officially incorporated. That same year, a young entrepreneur named John Deere moved to Moline to take advantage of the water power and access to transportation hubs. His factories eventually grew into a multi-national corporation and forever shaped the workforce and culture of the city, as well as influenced the wider world of agriculture in a tremendous way.

In 1854, the first railroad arrived, and in 1856, the first bridge was built across the Mississippi. Although the bridge crossed in Rock Island, Moline's leaders persuaded the rail company to run the tracks through Moline rather than straight up the Rock River valley, ensuring the benefit to the industry of the city.

Immigrants followed the railroad and employment opportunities with Deere and Company and other manufacturing enters in the city. The largest influxes at the time were Swedes, Belgians, and Germans. In the years leading to the Civil War, Moline was known as a bastion for abolitionists. Several homes in the area were official safe havens on the Underground Railroad.

The post Civil War years saw industry continue to boom in the area, and in 1881, Deere and Company switched on the first 16 electric lights in its shops. Through the 1880s and 90s, immigrants continued to pour into Moline, especially those from Belgium. Around the turn of the century, Moline had the largest Belgian community in the entire United States. By 1900, the city had 22,000 residents and was the center of agriculture and machine manufacturing in the United States.