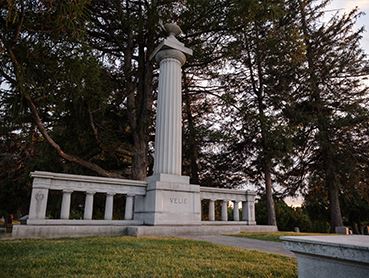 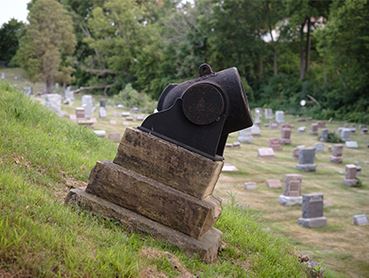 Riverside Cemetery is much more than a public cemetery, but a rich history of Moline and the surrounding communities. The land where Moline is situated was occupied for the first time by white settlers in the year 1829. What began as Rock Island Mills in the 1830’s, was platted and changed to “Moline” in 1843. The town of Moline was incorporated in 1848.

The Moline Cemetery Association was incorporated by the State of Illinois February 17, 1851, and was governed by a Board of Trustees. Joseph Pershing served as the first Sexton and continued in that capacity until 1872. This original five acre cemetery, often referred to as the “4th Avenue Cemetery”, is located today between 4th and 5th Avenues at approximately 33rd Street. The land was purchased from Samuel and Mary Bell and was located a mile from the downtown. A small cart road led to the cemetery, the present River Drive.

In 1872, Moline voters approved to incorporate as a city. Due to an increasing population it became necessary to expand the Cemetery. After the election of John Deere as mayor in 1873, The City replaced the Cemetery Board of Trustees with a Board of Directors appointed by the Mayor and the City Council. Large tracts of land were purchased from various different owners in order to expand the Cemetery to the south. This was the time of the Rural Cemetery Movement, where cemeteries were transformed into beautiful parks. The success of these new cemeteries helped inspire cities to build public parks. In February of 1874, the now famous Chicago Architect and Landscape Architect, William Le Baron Jenney, “father of the skyscraper”, was hired to design the newly named Riverside Cemetery. Jenney was educated in Paris and is known for his designs of Chicago Parks, buildings, and homes in the Chicago suburb of Riverside, IL. Also, Jenney designed “Overlook”, the Moline home of Charles and Mary Deere.

Riverside Cemetery is known for its unique and picturesque terracing and view of the Mississippi River.

In 1978, the City Council dissolved the Cemetery Board and moved Riverside Cemetery under the Park and Recreation Board, also appointed by the Mayor and City Council. Today, Riverside Cemetery consists of 62 acres, not including the area between the upper and lower cemeteries which is now used as Riverside Park. This area was originally cemetery property - - named “The Green” by William Le Baron Jenney. Riverside Cemetery is the final resting place of approximately 28,000 people, including John Deere, founder of Deere & Company and many more people that have made Moline and the nation what it is today. If you would like to read more about the history of Riverside Cemetery and the people buried here, you will want to look at the book, “Echoes from Riverside Cemetery.”