A Historic Depiction of Moline in the 1850s

From 1841 to 2009, Moline’s downtown has served as the heart of our city. Over the course of nearly 170 years, the area has grown to include and support industry, the arts, education, dining, and shopping. 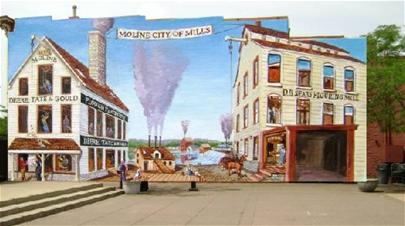 Founded on the waterfront below the Sears Dam, Moline derived its name from the French word “Moulin,” meaning “mills.” Major businesses, including the Deere, Tate & Gould plow factory and Sears flour mill, benefited from the Mississippi River’s shipping channels and the dam’s water-generated power. From the start, Moline was well situated and grew rapidly.

Moline would continue to prosper throughout the 19th century, coming to be known internationally as the “Plow City.” By the early 20th century, the early mills and factories were replaced by larger, modern factories. By the 1980s, as industries restructured, many of these buildings were demolished, opening up the area for new development.

In the tradition of its earliest settlers, Moline continues to evolve. The Moline City of Mills mural will beautifully recapture that pioneer optimism and memorialize it in its rightful place, the downtown Historic Block.