The Mississippi River, the Rock River, and their tributaries are sources of flooding in Moline. The City of Moline is working to reduce the risk of personal injury and property damage due to flooding by providing local maps, regulations, and other useful information. 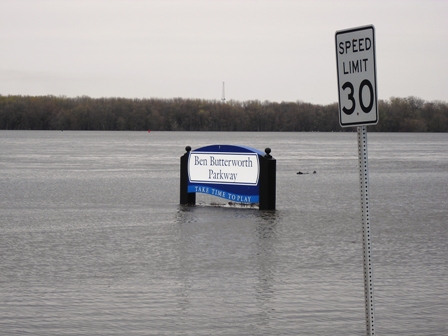 Questions about local flood hazards, floodplain mapping, construction regulations, and similar inquiries may be directed to the Community Development Department at 309.524.2050.

The Mississippi River is the largest river in North America and forms the boundary between the Iowa and Illinois quad cities. July 9, 1993, Mississippi River rose to a record 22.63 feet in Rock Island, 7.63 feet above flood stage. This is widely considered the base flood for the Mississippi River (1% annual chance flood; also known as the "100-year flood").

The Rock River is a tributary of the Mississippi River and traverses the southern half of Moline. April 21, 2013, Rock River rose to a record 16.52 feet in Moline, 4.52 feet above flood stage and broke 2008’s record 16.33 feet. This flood was caused by widespread heavy rains. Ice jams are also common on the Rock River, which can result in rapid, frequent flooding.